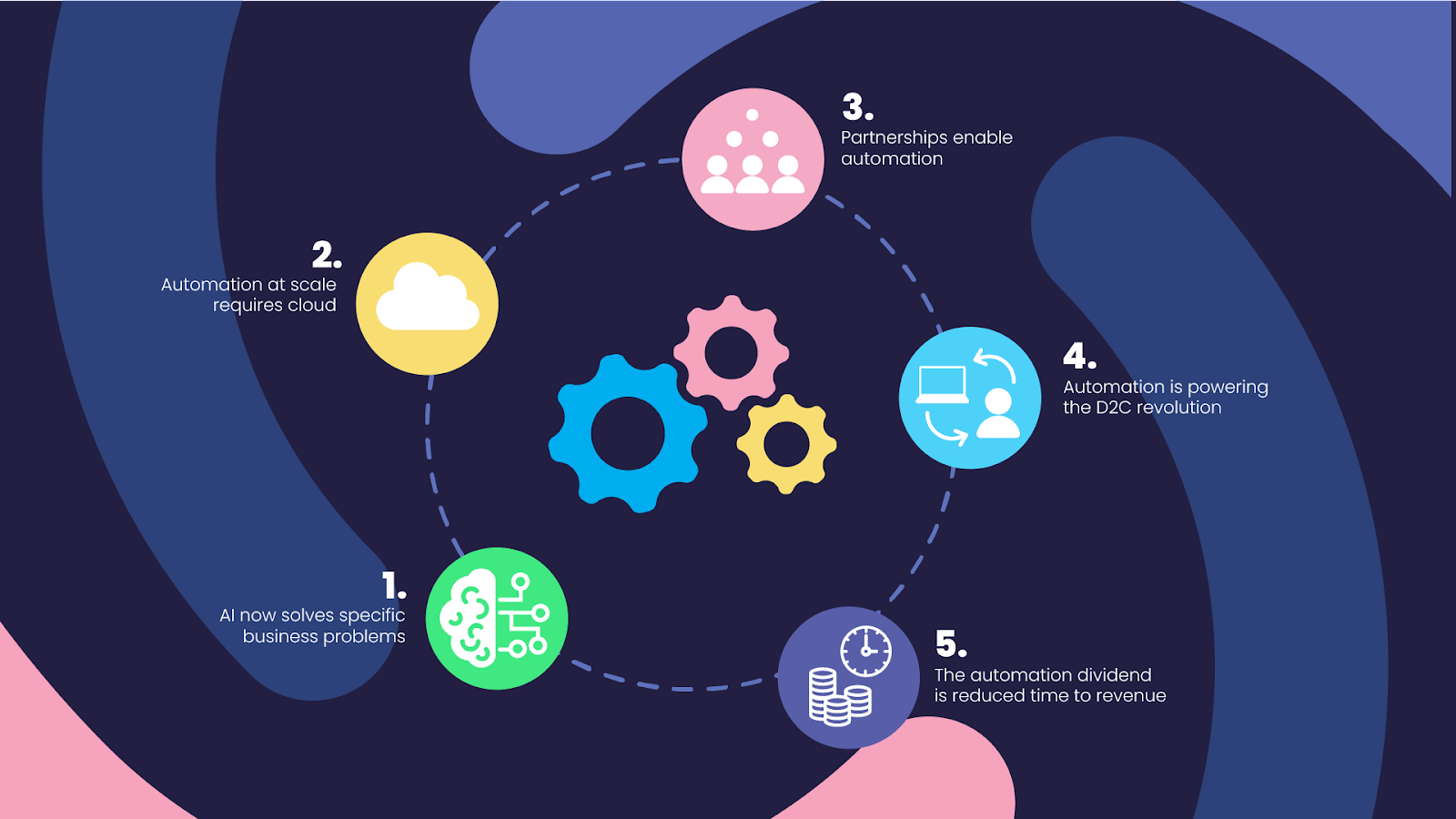 According to the DPP’s latest report Automating Media, the processes of media production and distribution have been on a path of increasing automation for many years, but the progress has been slow. The report, part of the DPP’s 2021 The Cloud for Media series, highlights that one of the biggest shifts that will see automation finally become more widespread for media workflows is the transition to the cloud. Its flexible and scalable nature crucially means that media companies can evaluate AI/ML, test new techniques and scale up workflows once they are proven. No wonder then that the report found that the first step towards automation is usually to centralise media in the cloud and catalogue it.

Other key findings include:

4. Automation is powering the D2C revolution

5. The automation dividend is reduced time to revenue

At Codemill, we have seen that broadcasters, production studios and media organisations have felt more pressure than ever to migrate from on-premise hardware and legacy software to the cloud. It has become clear that leaving behind the limitations of on-premise workflows, tethered to data-centres full of fixed and aging infrastructure, is now crucial to centralised, flexible, and scalable multi-site working, and not just as a response to the pandemic.

Many of the most complex production systems were built years ago for HD workflows and now this infrastructure is challenged to support content processing and distribution at exponential scale for broadcast, as well as VOD and OTT. There are a number of factors at play here; the explosion in commissioning and content production, global content release schedules, the pressure to deliver multiple localised versions, faster turnaround times, from live event to on-demand, along with the need to now deliver UHD and HDR content to a plethora of new online video platforms and services.

The shift from 90% on-premise workflows with only 10% done in the cloud, to 90% in cloud and only 10% done on-premise (such as final mastering and finishing) now looks achievable, using highly integrated, hybrid cloud platforms and services. This huge content migration also presents the perfect opportunity to refactor and optimise workflows, especially to reduce or eliminate mundane, repetitive, time consuming and error prone manual tasks. At the same time, cleaning up and enriching content metadata, to improve search and content production turnaround times, is where AI/ML services can bring real value and a faster ROI.

And while the lack of broadcast reference monitoring, for colour grading or for low latency audio playback, remains a limitation today in the cloud, innovation never sleeps and we are confident these limitations will be resolved soon.

Contributions for the DPP report came from workshops and interviews with subject matter experts, including colleagues at Codemill. It covers the definition of automation, the progress made so far, for media workflows and compares how that has shifted since the last DPP report on AI/ML and media automation, back in 2018. The report also highlights areas with the most potential for improved efficiencies using automation and features case studies of media companies already benefiting from media automation in the cloud.